Tags: Community Involvement, Operation Round Up 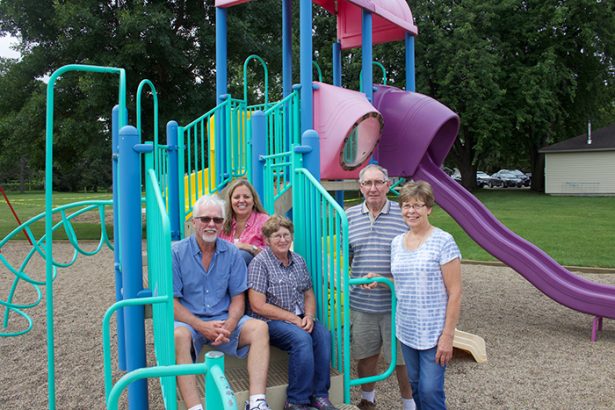 Through the Operation Round Up® (ORU) program, Stearns Electric Association gives our member-owners the opportunity to give back to the community. The rounded-up funds (between 1¢ and 99¢) are placed in a trust fund and administered by a trust board appointed by the Cooperative’s elected Board of Directors. Local civic organizations and worthy causes receive ORU funds through an application and selection process. In July, St. John’s Community Park received funding through the program to revitalize the former St. John’s School playground into a larger, community park.

A RICH HISTORY
In 2015, the community of Meire Grove faced a tough reality: the historical St. John’s School would close. The Diocese of St. Cloud ultimately made this decision as school enrollment numbers continued to decrease and the building continued to age. Students who attended the school would still attend classes at its sister school, St. Andrews, just down the road in Greenwald.

Built in 1915, St. John’s School had been open for 100 years before permanently closing. In its time, the building, which served as both a school and a convent, was saved in the 1920s when a fire destroyed the adjacent church. The building was a staple in Meire Grove, located at the intersection of Minnesota State Highway 4 and County Highway 13.

Earlier this year, the city of Meire Grove opted to tear down the deteriorating building after determining it was too expensive to make required updates.

“It wasn’t that we wanted to take the school down, but we couldn’t find a good option to maintain the building,” Ginny Nathe said.

“Had we kept the building up, we would have needed a new roof and new windows right away. Plus new heating and electrical systems throughout the building, and a plan to make it accessible,” Kathy Illies added. “We just didn’t have the funding to complete these tasks.”

“When the building came down, we were able to salvage many things from the old school, including the cornerstones from both the school and the original church, a guardian angel statue and the school name sign,” Char Meyer said. “These items, along with others from the original building, will be incorporated throughout the new St. John’s Community Park.”

A BRIGHT FUTURE
St. John’s Community Park is a project that arose out of the ashes of the old building. A group of local volunteers saw potential for a larger, community-wide park in the space formerly housed by the playground of St. John’s School. They are committed to enhancing the park in order to make it more community friendly while also preserving the history of the former school site.

Nathe, Illies and Meyer all serve on the volunteer planning committee for the new park, along with John Nathe, Dan Meyer, Nick Kelzer, Joyce Silbernick, and John and Geralyn Primus. Together, the committee has big plans for the redesigned park.

“We started with the parking lot since we needed more parking for the church,” Char Meyer said. “Now that the lot is done, we are working on adapting the former school playground into a larger community park.”

This summer the committee put edging around the playground area to make it wider and spent hours weeding the playground and filling the area with pea gravel. Most recently, the group installed a basketball court and a brand new, adjustable basketball hoop.

“We were hardly done pouring the concrete for the new basketball court when a group of local kids stopped by to ask when they could start playing on the new hoop,” Ginny Nathe recalled.

This fall, the committee will plant eight trees around the park’s property. Other future visions for the park include adding a pavilion, a bench swing and perhaps even a baseball field. Eventually, the historical artifacts from the original building will be used to build an outdoor bench and a welcoming entrance into the park, among other things.

“Through this project, we want to unite the community,” Meyer said. “We hope that by building up our park, we breathe new life and vitality into our city.”

ONGOING PROJECT
Although the group has made significant strides already, there is still much work to be done to complete the St. John’s Community Park.

“We started small and we complete projects as we can afford to do so,” Illies said.

“We anticipate that the entire project will take a couple of years to finish, depending on the work we decide to complete and the donations we receive,” Char Meyer said.

“Thank you to the Operation Round Up Trust Board for selecting us as one of the recipients for funding,” Meyer continued. “We are so appreciative of and grateful for your support of our local community.”