Power that Persists: Power of Membership 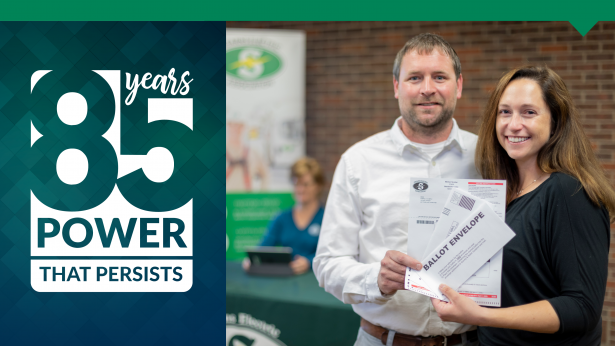 At a Farm Bureau Banquet in Cold Spring, Minnesota on November 23, 1935, E.C. Lenzmeier, extension agent for Stearns County, told community leaders about the possibility of bringing electricity to farms in Stearns County. He recruited a few people to help sell rural farmers on the idea of forming an electric cooperative.

At the first organizational meeting in January of 1936, attendees officially voted to organize a rural electric cooperative – the Stearns Cooperative Electric Association. They decided rural farmers could buy-in to the Cooperative and become members by purchasing a share of stock for $2.

After the first meeting, a small group of new members was tasked with recruiting additional farmers to purchase stock in the Co-op. This proved to be a daunting job, especially as farmers had just made it through The Great Depression and didn’t fully understand what electrical service would mean or how long it would actually take to get electricity to their farms.

But the members were successful! 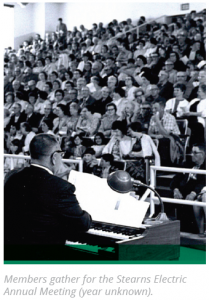 The first Annual Meeting of the Co-op was held on November 20, 1936, fully organized and run by volunteer members of Stearns Electric. During the meeting, members elected the first Board of Directors and began outlining the official Articles of Incorporation and Bylaws for the organization.

By the time Steans Electric received its first loan and was officially established as a business, 853 shareholders had purchased $2 stock, and 147 more had made verbal agreements.

As a cooperative, Stearns Electric follows the seven cooperative principles. Of those seven principles, there are three that stand out when it comes to the power of cooperative membership:

Through the annual election of directors, members of Stearns Electric have the power to determine who represents them on the Board of Directors.

Your vote matters! Every three years, members elect a fellow member from their district to represent them on the Cooperative’s Board for a three-year term.

Since the inception of the Cooperative, members have had the opportunity to vote either in-person or by mail in the annual director election. These are both still options today, but in 2019, Stearns Electric adjusted its practice to include electronic voting as well. By doing so, the percentage of voting members increased significantly, meaning more members are now making their voice heard in setting the direction of the Cooperative.

Cooperative members are more than just consumers; they are owners of Stearns Electric.

When it was first founded, members purchased shares of stock when they joined the Co-op. Those shares created capital for the organization and were used to recruit more members, hire employees and fund projects.

Though Stearns Electric no longer sells stock, members still invest in the Cooperative by paying their electric bill every month. However, unlike investor-owned utilities, Stearns Electric refunds its capital (money), above the cost of operations, to our member-consumers in the form of Capital Credits.

Capital Credits are just one of the many ways cooperatives are different than for-profit businesses, such as investor-owned utilities. Another cooperative principle that sets electric cooperatives apart from other utility providers is our concern for community.

As an owner, you are part of an organization that puts community first. When we are able to go out into our community, we get the chance to focus on what really matters: people. 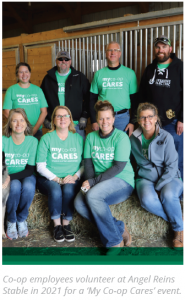 Some of the ways we live out our concern for community is through our ‘My Co-op Cares,’ Operation Round Up® and employee giving programs.

Established in 2019, our ‘My Co-op Cares’ program allows Stearns Electric employees to volunteer during working hours at area non-profits and organizations that are making important impacts in the communities we serve. Employees have spent over 400 hours volunteering for the program so far. In 2022, Stearns Electric will send employees to volunteer with three new organizations throughout our service territory.

Cooperative employees also participate in two annual events to raise funds for the area community: the “Sharing Our Blessings” drive and the Employee Charity Event.

Last June, employees donated to the “Sharing Our Blessings” drive to provide funds to local families in need through our internal wellness program. Employees raised a total of $1,000 through individual donations and an internal employee competition. 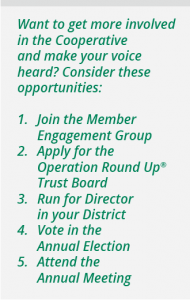 In November, through a silent auction and raffle at our 14th Annual Employee Charity Event, Stearns Electric employees raised another $5,500 for the Bikers Against Child Abuse – Granite City Chapter.

Our area communities also benefit from Stearns Electric’s Operation Round Up® program. By participating in the program, members round up their monthly electric bill to the nearest dollar. Those funds are pooled together to award grants to area non-profits, charitable organizations and worthy causes. A Trust Board, made up of Cooperative members, meets three times each year to distribute funds. This small change makes a large impact on the communities where we live and work.

Stearns Electric continues to operate by the members, for the members. Thank you for remaining involved in your Cooperative and for letting us serve you.