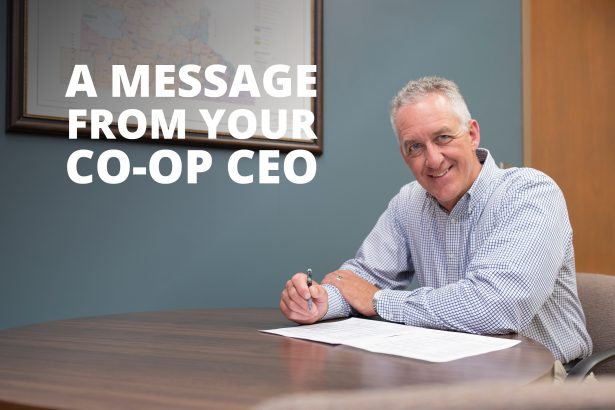 In August, I shared news of the pending sale of Great River Energy’s (GRE) Coal Creek Station to Rainbow Energy Center and Nexus Line. Though the sale is not finalized just yet, a few key factors were announced and approved over the last month. We anticipate the sale to be finalized sometime after May 2022, pending a few final approvals.

On January 6, the Minnesota Public Utilities Commission approved the transfer of the construction permit for the Minnesota portion of the HVDC transmission system from GRE to Nexus Line. This portion of the HVDC system spans from central North Dakota to the Twin Cities. It is used to bring electricity from the generation and transmission facilities in North Dakota to us here in Central Minnesota and beyond.

Likewise, on December 30, the Federal Energy Regulatory Commission issued an order effective January 1 approving an amended generator interconnection agreement between GRE and the region’s grid operator. This order was also needed to advance the sale of the Coal Creek Station power plant and its facilities. At the final closing of the sale, this amended interconnection agreement will be transferred from GRE to Rainbow Energy Center.

Since negotiations began regarding the sale of Coal Creek Station and the HVDC system, GRE has always had an arrangement with Rainbow Energy Center and Nexus Line to provide GRE with access to interconnect new wind-energy projects to the HVDC system.

On January 18, GRE announced the Discovery Wind project, in partnership with developer Apex Clean Energy. The 400 MW wind energy project will begin operating in 2025 in McLean County, North Dakota, very close to the existing Coal Creek Station. It will be the single largest wind project in North Dakota and deliver renewable energy to Central Minnesota along the 436-mile HVDC system.

These changes are projected to help reduce GRE’s carbon emissions by over 80% by 2027.