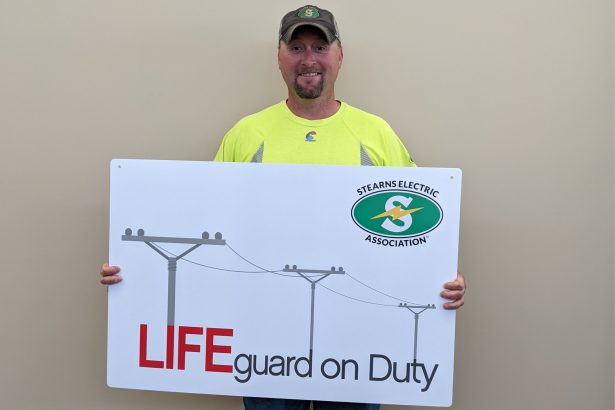 MREA recognizes Cooperative employees throughout the state who go above and beyond the expectations of keeping individuals safe through their LIFEguard program. Siemers is credited with speaking up and potentially saving the lives of two fencing contractors.

In July, Siemers was working in the field when he looked up and noticed two contractors about a block away installing metal posts for a chain link fence with a skid steer. As he noticed them, he realized they were about to start driving a metal post right on top of where a Stearns Electric-owned underground three-phase power line was buried.

Siemers told his crew lead Bob Barutt, who ran over to stop them. Barutt asked if they had any locates to dig in that area and they replied they were told they were all clear. However, this was not the case.

Barutt explained the hazard as they were about to pound a metal post into an energized underground power line that was buried right below them. The contractors were very grateful when they learned of the consequences and thanked the Stearns Electric line crew multiple times.

If the posts had been driven in before Siemers spoke up, it’s likely someone could have been seriously injured or killed. Because Siemers was paying attention to what was going on with his surroundings, he was able to stop them before anything bad happened.

“The fence post that was going to be installed was 12 feet long and likely would have been driven five feet or more in the ground,” Glenn Blommel, Stearns Electric’s Manager of Operations, explained. “The stake for where this post would have been driven is on top of our energized three-phase power line that is around four-feet deep. If driven before Mike spoke up, it’s likely someone would have driven the stake directly into the underground power line and could have been seriously injured or killed.”

“Because Mike was paying attention to what was going on with his surroundings, he was able to stop the fencing contractor before they drove the post into the energized underground line,“ Blommel concluded. 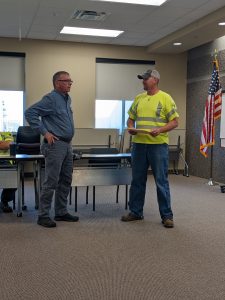 “We commend Mike Siemers as a LIFEguard who observed his surroundings, noticed a hazard to other workers and spoke up about it to his supervisor,” Terry Ehli, safety specialist at MREA, announced. “This quick action saved their lives and represented a key action in safety – to recognize our hazards and take action, even when it is not your co-workers. He lived his commitment to safety this day and actively cared for others. Well done!”

Siemers is a journeyman lineman at Stearns Electric, where he has worked for 16 years. Siemers is the fourth Cooperative employee to be recognized with a LIFEguard award through MREA.